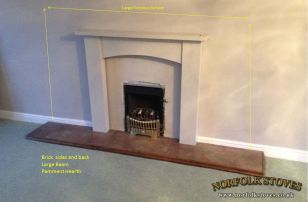 Gas fire to be removed along with surround and hearth. We estimated the size of the original fireplace would be quite large as similar properties on the street had very large fireplaces.

This fireplace had a small gas fire and wood surround , the initial site survey and investigation predicted that the fireplace behind would be very big. To confirm this the installation team removed the gas fire and surround to knock through the wall and reveal the original builders opening.

We added the extra brickwork to the sides and a pamment hearth was laid and given 24 hours to set. The next stage was the installation of the Consort 9 Slim-line Wood Burner and large reclaimed oak beam.